Today me and Gozo met up with Isa and Diego for fancy Sunday brunch at Barnyard. And it is officially our new favouritest thing to do! 😉

Since Gonzo left Barnyard in December, we haven’t been back there, so everyone was super happy to see him and he only spent about half the time having breakfast with us – he was too busy saying Hi to everyone and checking if everything’s still running without him.
And I guess the overwhelming joy of his former workmates channelled back to the kitchen – as we didn’t order about half of the food and drinks that ended up on our table! 😀

For starters we shared waffles and brioche with home-made hibiscus and Marco Polo (yes, that’s a fruit) jam, warm cornbread with butter and honey and avocado on toast. For “mains” Gonzo had the black pudding with chorizo, potatoes and fried egg, Isa had amazing greek yoghurt with hazelnuts and real honeycomb and me and Diego both had the smoked salmon and scrambled eggs on brioche. We also had carrot, mango and orange blossom smoothie and watermelon juice. It was delicious!
Honestly, I don’t know if I ever had such a fancy breakfast before! And comparing the list of things we had to the menu – I think we had at least one of each! And in the end, they brought us Prosecco! 😀 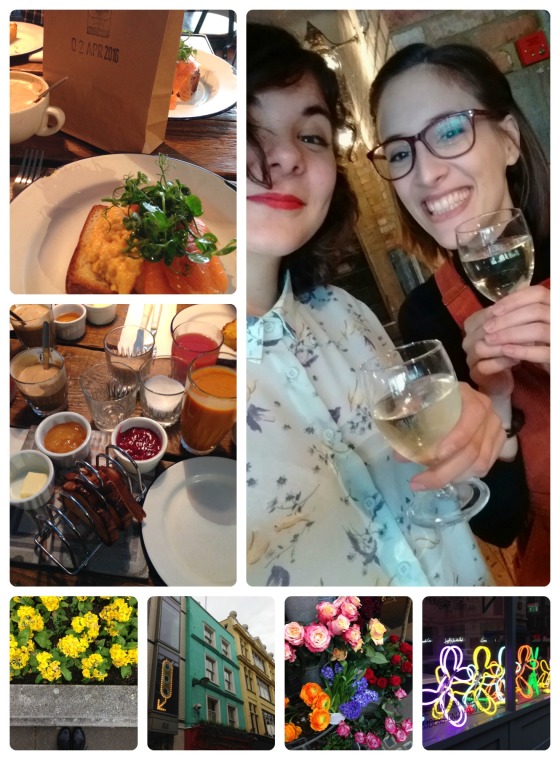 After a very long and exhausting brunch, Gonzo had to go home to get some editing done and I went to have a lovely long and sunny walk in colourful Soho.

What a good Sunday!

Hope you had an amazing weekend as well!
XX, Angie

This weekend Pride took place in London. It’s one of the biggest celebration of the LGBT community. The highlight was definitely yesterday’s Pride Parade.
I met up with Monica for brunch in Soho, where all the streets were decorated in rainbow colours and then we went to see the parade at Oxford Circus.

It was simply awesome! I’ve never seen anything like it before. There were wagons and busses, decorated, glittery and colourful, people in costumes, dancers, marching bands. Big organisations and companies, like TfL, the Miners Union, London Fire Brigade and Starbucks were participating with very impressive vehicles and much ado and even the Armed Forces were marching to show their support; and then there were small community centres, help groups, and NGOs, just marching, showing pride. The most heart-warming was a small group with a very humble banner, stating the support of elderly LGBTs – and grey-haired men, women and couples walking hand in hand.

And as a cherry on this rainbow-coloured cake, we had a small IULM reunion and a bit of uni-nostalgia as we met up with Luca and Valery – friends from our uni in Milano who happen to live in Abu Dhabi now, but came to London to attend Luca’s graduation.