One exam down, about a hundred more to go. That could easily be the motto of my weekend, and actually the whole of spring until July.

I spent a whole grey and rainy morning trying to figure out what to study next, which summaries and essays I still have to write and which deadline is the most pressing.

But after lunch the sky cleared up and the sun came out, so I did the only sensible thing to do: I let all my writing and deadlines be and went to have a walk in the centre.
My steps carried me over Piazza Navona to the flower market on Campo de’ fiori, one of my favourite places in Rome. It’s always alive with tourists, vendors and Italians trying to get their shopping done. I had a walk in the narrow streets surrounding it and read a couple of chapters sitting in a small park, enjoying the sunshine.

And then, just before catching the bus home, I couldn’t resist the temptation any longer and bought a beautiful bunch of marguerites. 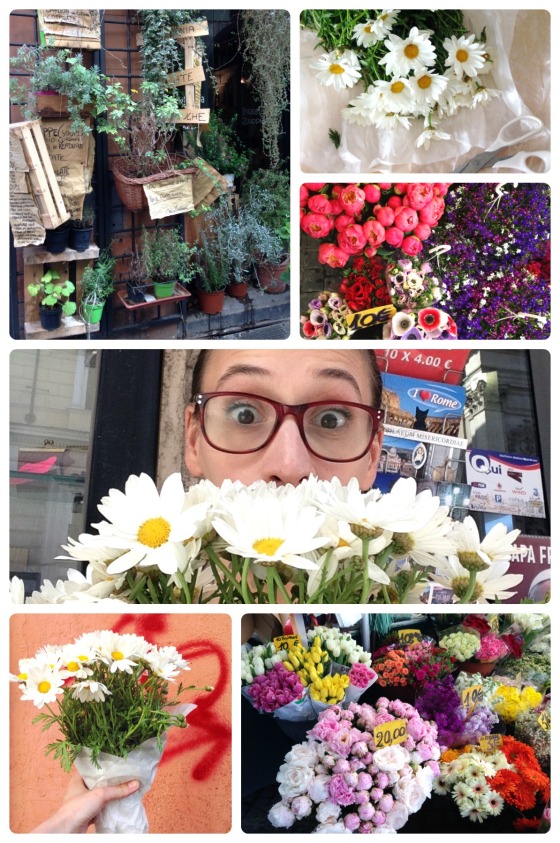 After two days of the-world-is-about-to-end-rain the sun finally came back out today. I decided to celebrate this occasion by spending the afternoon exploring the park at Villa Borghese.

I made way there past myriads of tourists and up the Spanish Steps – when you go up there are actually no people at all! All the lazy tourists stay at the bottom 😉

The park is huuge! Although I had quite a long walk, I only managed to see a little bit. I watched the little boats on the pond and then placed myself strategically on a park bench in order to soak up some sunshine whilst reading.

And when it finally started to get cold, I found a lovely little café and had some tea and dolci for merenda – quite an English-Italian clash, I admit. Old habits die hard! ^^

Today I went to pick up Gonzo at Paddington Station when he came back from Maidenhead where he teaches drama and film on Saturdays. It was a nice and sunny, so we sat by the canal in Little Venice and had pizza for lunch.

For the last four weeks or so, the 2016 Sony World Photography Exhibition was on at Somerset House, and even though we really tried and made actual plans to go and see it earlier, we ended up going today, on the penultimate day of the exhibition. But hey! Better late than never, right? 😉

The exhibition was divided between the “Professionals” section in the West wing and the “Amateur” section in the East wing. The different categories included Architecture, Smile, Conceptual, Nature, Sport, Portraiture, Travel and Current Affairs. It was really interesting to see all the different photographs and styles, from documentary to campaign images.

We actually arrived quite late at the exhibition, but that meant when we saw the last couple of rooms, the sun was already quite low and dipped everything into heavy golden light – simply beautiful.

To finish off this lovely Saturday we had a walk on the Strand in the setting sun, and once home decided to have popcorn for dinner and made plans for summer. ❤