The forecast of arctic temperatures has been in the news for a few days now, but since yesterday evening there’s been a straightforward prediction of snow in Rome. Whereas everyone else seemed to freak out (including the mayor and my flatmate), I was really looking forward to it!

Today I woke up early and left house at 7:00 am in order to have a walk in the snow. It has been snowing all night and still kept on going; there were about 10 cm of snow to trudge through. Busses weren’t running of course, but the metro did. And who minds a bit of a delay anyway?

As uni was suspended for the day, I was free to explore the city. I chose the classic tourist route: Vatican, Castel Sant’ Angelo, Piazza Navona, Pantheon, Piazza Venezia, Colosseo – it was magical! St. Peter’s Square was covered in white and a bunch of young priests had a snowball fight. The snowflakes were big and heavy and I was actually struggling to take pictures. I walked on, past the Castle Sant’ Angelo and crossed the Tiber. The narrow streets near Piazza Navona were deserted and someone shouted “buon natale” from a window as I passed underneath. By the time I reached the Pantheon, I had to stop in a coffeeshop to dry my gloves and wipe my glasses; I was freezing, but I couldn’t go home yet – I wanted to see the Colosseo in the snow. By the time I got there it stopped snowing, but it wasn’t any less impressive. I circled it once, took pictures of strangers in the snow, had my picture taken and watched poorly equipped tourists getting that Insta-shot. 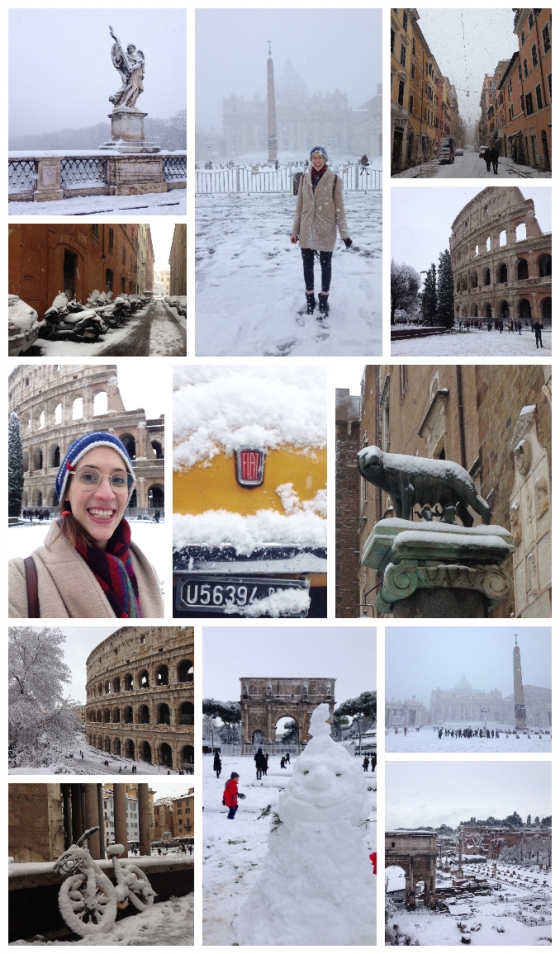 When I finally decided to take the metro home (my water-proof shoes turned out to be not as water-proof as I thought and I was getting really cold), lots of people started to emerge from the tube. It was about half past 10, the tourists started to swarm out to marvel at the frozen city, it kinda started to get crowded. So I happily got on the train back home, having done my bit of sightseeing for the day. Back home, I had a hot shower and a second breakfast.

Rome in the snow was absolutely stunning! I am happy I had a chance to see the city in the early hours, without too many people about. It looked so quiet and peaceful. But the funnies thing was to observe how people tired to cope with the snow. From sheer pleasure to absolute desperation – I’ve seen it all today. And much more. Here’s my ultimate Snow in Rome-Bingo Sheet:

PS: a friend of mine just called me: apparently there’s people skiing at Circo Massimo!

When I went to live in England with my sister, our mum made it quite clear: “You can go and live wherever you please, but at Christmas you have to be at home.” – and so it has been ever since. Some years just a couple of days, a hurry almost, some other years I spent weeks of festivities and re-charging batteries at home.
And so, just two days after coming back from Sicily, I packed my bags again (full of Panettone, Torrone, Italian sweets and coffee) as it was time to fly home for Christmas. ❤

I love this time of the year! Even tough it wasn’t cold enough in Rome and not anywhere near snowy, one could feel the hustle of the last days before Christmas and even at the airport the mood seemed different to me – or maybe I am just projecting my own expectations onto everyone else.

Christmas at home is almost a sacred ritual for me. I know exactly who we have lunch and dinner with what days and when and where we celebrate. It hasn’t changed in years and I find it very reassuring and calming. It’s almost as if those couple of days follow a meticulous plan (full of traditions and food) which has never really been established, it just happened and now it’s there and everyone follows it. 🙂

The days in between Christmas and New Year’s were full of friends, snow, baking and happy doing nothing. I like it when being home is “nothing special”, as in: the way it always used to be, nothing extraordinary or exceptional.

On the 31st of December Gonzo came to visit and in the early morning I went to pick him up at the Salzburg airport. We spent a lovely “boring” New Year’s Eve with my family, my grandmas competed in cooking traditional dishes for us, we went sledge riding, had walks and photo shoots in the snow and Gonzo insisted on learning how to ski – and he did really well, considering he’s a Spaniard who’s not used to snow! 😉 In short, we had a couple of super cozy wintery holiday-days.

And after those wintery days in Austria we went to London – but that’s another story and shall be told in another blogpost.

How many wonderlands can you fit in a day?

Yesterday I went to pick up Isa at the train station (after watching Halmey’s Christmas Toy Parade and freezing my toes off), and she took me to Wonderland #1: Skoob, a basement filled floor to ceiling with first editions, second hands, hand-me-downs and donated books. I loved it! When we entered, we stood at the first step of the stairs leading down to the shop for a moment, just to enjoy that smell of books. I behaved really well, and in the end I only got four books – but we had to skip our usual “tea & gossip” session because I just couldn’t tear myself away.

We almost arrived late at the British Library, where Wonderland #2 is set. (Because we found another bookshop on the way…) Juanma and Diego joined us and together we visited the exhibition to celebrate the 150th anniversary of the publication of Lewis Carroll’s Alice’s Adventures in Wonderland.
It was really well made, showing the history of the story and how it influences pop culture ever since. I really loved the original manuscripts being showcased and how the exhibition design took a twist on classic Alice representations. Of course the colourful pop-up Alice in Wonderland shop was one of the highlights and selfie with the heroine herself couldn’t go amiss!

And what can I say? As it’s late November in London, there is obviously only one destination for Wonderland #3: Hyde Park!
We made our way to Winter Wonderland where we had mulled wine (not as good as my home-made one, of course!), Pretzels and a big helping of Christmas joy. Isa and Diego took a ride in a thing called “Hangover”, and we all got our heads dizzy in a spinning barrel.
“It’s like Feria, but frozen.”- Juanma.

When I came home, I was absolutely wasted. Wonderlands are fun, but very exhausting! Which leads me to Wonderland #4: with pillows and a blanket! 😉

Hope you had a wonderful weekend as well!